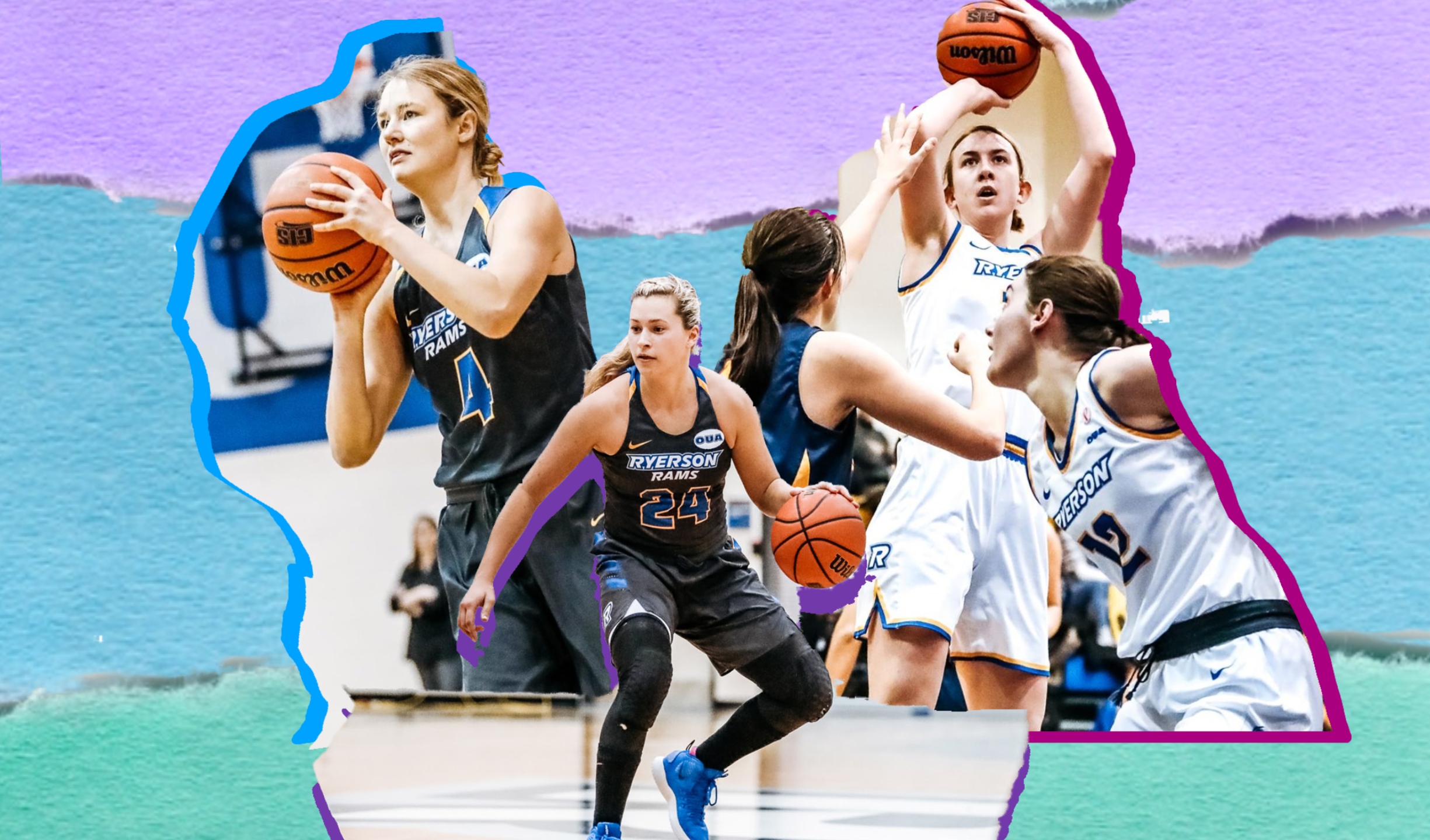 I chose Ryerson for basketball, but it’s the moments off the court I’ll remember most


Despite an OUA All-Star career, Marin Scotten says the community aspect is the highlight of her time as a Ram

I chose Ryerson for basketball, but it’s the moments off the court I’ll remember most


Despite an OUA All-Star career, Marin Scotten says the community aspect is the highlight of her time as a Ram

As a member of the women’s basketball team at Ryerson, I’ll never forget seeing our three seniors, Bronwyn Williams, Emma Fraser and Hayley Robertson walking into a fully-decorated team room last year, almost all of us with tears in our eyes while the song “Closing Time” by Semisonic played in the background. Blue and gold balloons littered the floor, each of the seniors’ lockers decorated with streamers. A poster-sized collage of pictures from their four years at Ryerson hung below.

When the seniors finally entered the team room after hours of us preparing and decorating, the feeling was bittersweet. They opened their gifts and we all hugged but there was an underlying tone of sadness, knowing we only had a couple of weeks left with these girls as a part of our team. Having played with them for the last three years, we had all become so close–it wouldn’t be the same without them. Nonetheless, we started getting ready for our last home game of the season.

This is one of many special moments I remember off the court. Although I came to Ryerson for its athletics program, it’s these kinds of memories that I’ll cherish most when I look back at my time here.

At age 17 while choosing which university I would go to, I ultimately landed on Ryerson solely for the quality of the basketball program. At the time, basketball was one of the most important things in my life and I was determined to be the best I could be. As Ryerson was located in Toronto, arguably the epicentre of Canadian basketball, I thought it would offer the most opportunity for growth in the sport. I also loved the coaching staff and facilities, and the women’s basketball team had become one of the top teams in the country in recent years.

However, what I didn’t realize at such a young age was that throughout my time at university, my love for basketball would waver. I assumed basketball would always give me the same sense of accomplishment, fulfillment and joy it had given me throughout most of my life.

Although I came to Ryerson for its athletics program, it’s these kinds of memories that I’ll cherish most when I look back at my time here

As most university students know, you change a lot in your four years of undergrad and with those changes come new interests and a shift in perspective. By my second year, my love for the game had changed; basketball was no longer the main priority in my life, nor was it the driving force behind my goals for the future. I was experiencing some mental health issues at the time, impacting my perspective on the sport.

This shift in values was difficult for me to come to terms with. Something that was such a big part of my pre-university identity was no longer super important to me. That being said, one thing that never wavered was my love for the people that basketball brought into my life.

Looking back at my time at Ryerson, it isn’t the wins and losses I remember most; it’s the time spent with my friends in between

To this day, I have met many of the most important people in my life through Ryerson athletics. Ryerson only has eight varsity teams, so it’s a tight-knit community. Pretty much all of my best friends are either my teammates or play on another varsity team.

When my love for the game began to falter, it was the people here who got me through. The friendships and connections I had built with my teammates and other athletes ran so much deeper than just our time spent in the gym.

Looking back at my time at Ryerson, it isn’t the wins and losses I remember most; it’s the time spent with my friends in between.

The endless laughs and late nights with my roommates, who are also my teammates, hanging out in the Mattamy Athletic Centre for hours before practice, trying to get homework done but really just chatting with friends, going to a trampoline park on the morning of a game and rushing home after it’s done to get ready for a night out with other teams; these are the memories that stick out to me when I think of my athletic career at Ryerson. These are the moments I miss most as we’re all stuck in lockdown.

I came to Ryerson because I wanted to accomplish my basketball goals but I gained so much more than points and awards could have given me. I gained four years of memories and some of the best friends I’ll ever have.

I’m so grateful for the people I’ve met through Ryerson athletics and I know they’ll be a part of my life long after basketball isn’t.