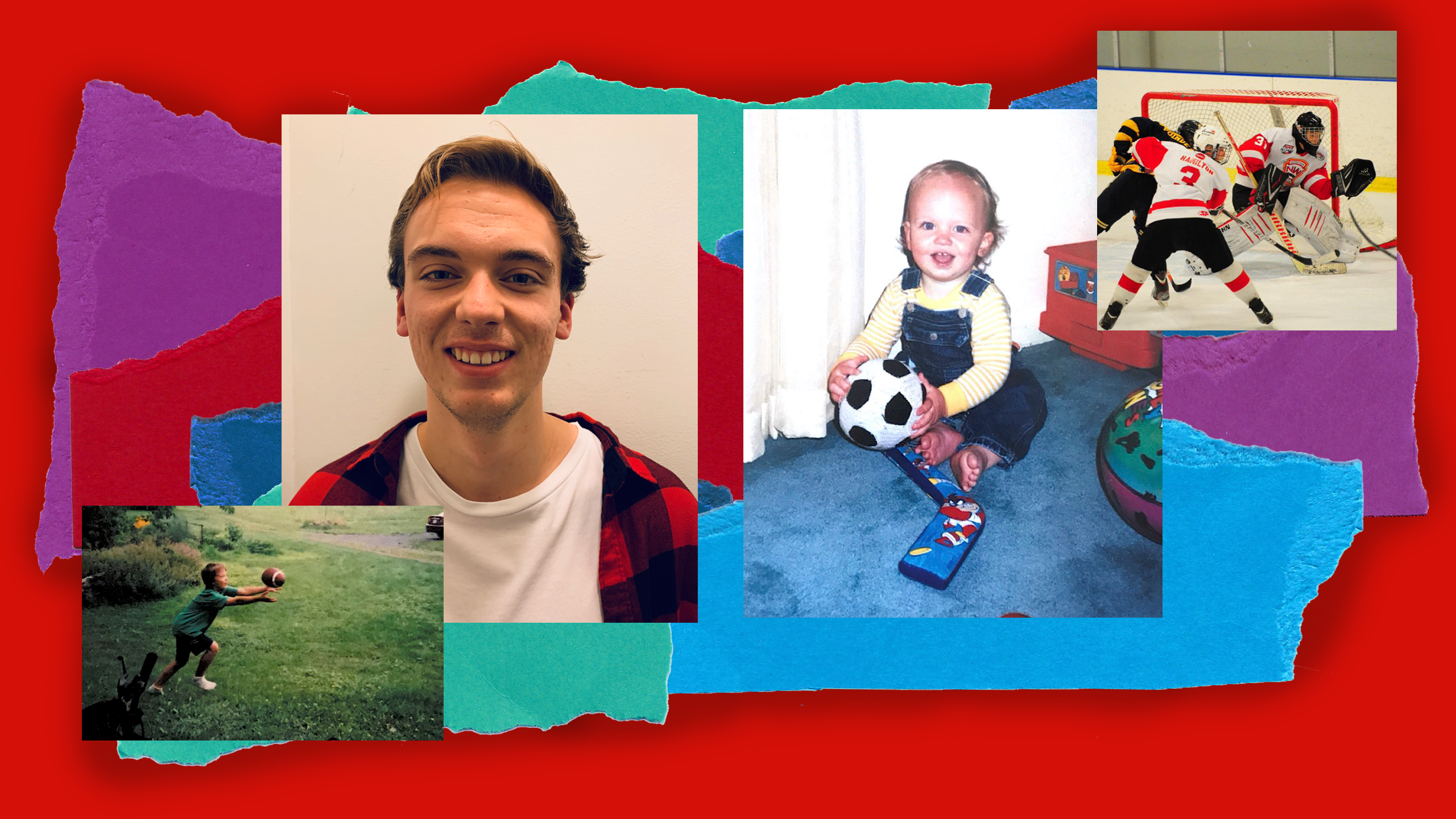 Although far from perfect, sport has been the constant companion in my life


Words by Will Baldwin
Illustration by Catherine Abes

Although far from perfect, sport has been the constant companion in my life


Words by Will Baldwin
Illustration by Catherine Abes

When I was a kid, I spent a lot of time on my own. With two older brothers who had long moved out by the time I started third grade, it was largely up to me to entertain myself.

Luckily, after growing up following my brothers at their football, basketball and hockey games, as well as at my Dad’s high school games (he was an assistant principal) I already knew what I loved most. My imagination ran wild at those games or at home watching professional ones.

From a young age, sports were my greatest passion. Thanks to them, I was never really alone. I would spend hours shooting pucks on the hockey net we had downstairs, playing basketball on our paved alley or even playing catch with a football by myself, imagining myself as one of my favourite Calgary Stampeders.

Just a kid with a ball or puck, a stick or net, and endless hours of entertainment.

I used to reenact the greatest moments in sports history or imagine my own. My career highlight was the 2026 ‘season’ in which I became the first athlete to win a Stanley Cup, Super Bowl, Grey Cup and NBA Finals in the same season (obviously being named Most Valuable Player across all of them).

From a young age, sports were my greatest passion. Thanks to them, I was never really alone

It’s not a coincidence that at the start of second grade, I gave up cartoons for SportsCentre in the morning. By that point, my sports fixation needed constant stimulation.

For those who didn’t grow up around sports, this might sound ridiculous. While many kids pass the time playing with siblings or hanging out with friends, I was totally happy on my own. That’s one of the great things about sports: it has an exceptional capacity to fill a void in your life that you didn’t even know needed to be filled.

To some, sport provides a community of friends and like-minded individuals with one passion in common. It allows you to escape into a world where, at least for a couple of hours, nothing matters but the game you’re playing or watching.

Sport can also open you up to a realm of new possibilities. From scholarships to universities, to professional opportunities, to the unification of millions for one big game, it has the ability to be so much more than just a boredom-buster or casual hobby.

It has a transcendent gift for touching the lives of each fan in a unique way. I think this widespread ability to impact people’s lives is why it’s so popular around the world.

But as Uncle Ben says (Spider-man was also critical in my upbringing), with great power comes great responsibility. When sport culture falls short, it has major consequences. Opportunities still vary drastically across genders, sexualities, races and more and that isn’t acceptable.

While sport can mean the world and more for some, it also mirrors society in many of the worst ways for others

For example, it took until 2019 for TSN and Sportsnet to offer a significant amount of WNBA games and neither showed any of the NWHL games in their bubble a couple of months ago. There are also significant issues with hiring marginalized folks to positions of power across the major sports world, very little Paralympic coverage outside of an Olympic year and wage inequalities in comparable positions like the US men’s and women’s soccer teams.

So while sport can mean the world and more for some, it also mirrors society in many of the worst ways for others. Across the sports world, athletes and fans from marginalized communities are consistently left behind by exclusionary and antiquated cultures that need to change.

All of these things are what this special issue attempts to encapsulate. In recognizing sports’ widespread impact, this year’s sports issue celebrates sport for what it is while also asking it to do better in areas where it falls short.

If our greatest athletes taught me anything, it’s that there’s always room for improvement. To really understand why sport matters we need to talk about the deep psychological, social and personal impacts it can have on both ends of the spectrum, good and bad.

Through all these years of loving sports, I’ve seen what’s possible when it’s at its best. Whether it be the walk-on who gets a scholarship, the athlete who came from nothing and fulfils a dream or the team like the Raptors in 2019 that brings a whole country together, it can truly change lives for the better.

If our greatest athletes taught me anything, it’s that there’s always room for improvement

I want everyone to be able to find the beauty I see in sport and what makes it so special. Right now, we aren’t there yet.

This edition is as much a celebration of a lifelong passion of mine as it is a call for that thing I care so much about to improve. Not everyone gets the opportunity to fall in love with it the way I did and until that’s possible, I’ll always advocate for it to be better.

While it’s been a long time since I hit the buzzer-beater to win the NBA Finals days after getting a shutout in game seven of the Stanley Cup final, in many ways, I’m still the same kid with a love of sport that’s never satisfied.

To this day, when I’m by myself, I can still turn on the TV, watch a game and return to that place of imagination and wonder I was in all those years ago. I may currently live by myself in a studio apartment, in the middle of a lockdown, in a pandemic. But thanks to sports, I’m still not alone—and I know I never will be.